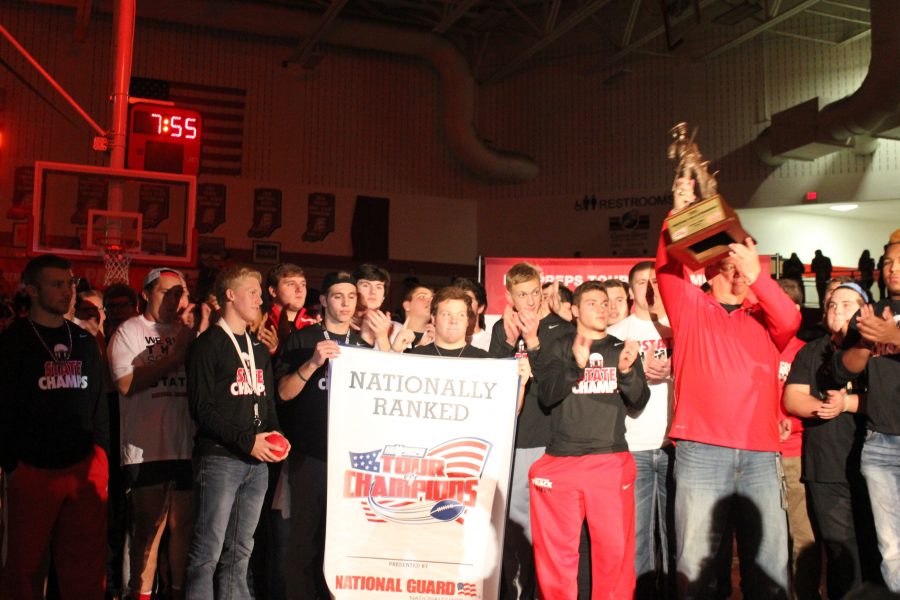 Photos and Story by Jessica Richardson

On Friday, Dec. 18 at halftime of the boy’s basketball game against Whiteland, MaxPreps and the Army National Guard honored two of Center Grove’s boy’s athletic teams.

It is the 11th annual United States of America 2015-16 MaxPreps annual Tour of Champions, which is in its 5th year honoring soccer. They wanted to officially recognize the boys soccer and football teams as some of the best in the country by honoring them with the MaxPreps and Army National Guard national ranking trophy presentation. This is one of the most prestigious team awards in all of high school sports, and it is an exclusive honor reserved for the top teams nationwide.

Trojan football was honored for engineering one of the best seasons in Indiana history.  CG averaged 308 rushing yards per game against one of the state’s toughest schedules.  In fact, the team had a perfect season going undefeated 14-0, defeating Avon (35-34) in a double-overtime semi-state game.  The Trojans concluded with the 2015 IHSAA Class 6A state championship game against Penn at Lucas Oil, becoming the first undefeated 6A state champions in Indiana history.  This state championship was highlighted as one of the MaxPreps’ Top 10 football games of the week.

Trojan soccer upset No. 1 Carmel in the semi-state game with a 2-1 win to advance to the state championship game for the first time in school history.  The Trojans beat Harrison in a shutout 4-0 to receive the 2015 IHSAA Class 2A boys soccer state title.  The soccer team outscored their opponents 92-15 with 11 shutouts.

Both teams excelled in their commitment, hard work and sacrifice on the field throughout the season.  Football Coach Eric Moore and Boys Soccer Coach Jameson McLaughlin were both thankful for this award.  McLaughlin said he was “most thankful for all the fans support, especially during the rainy weather of the state game.”