A Card Collection Turns into an Opportunity to Travel the Nation 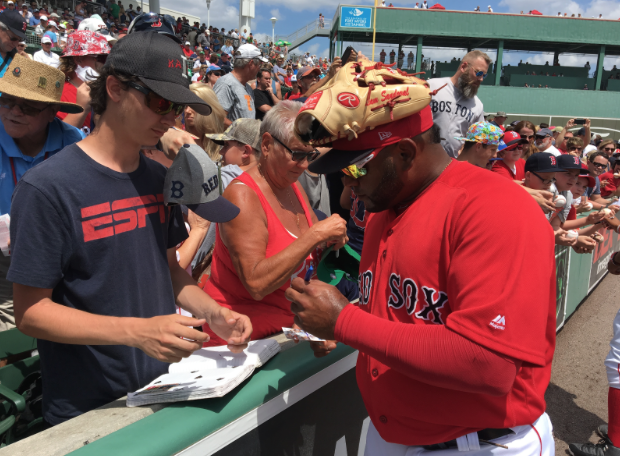 When he was a child, Nick LePage’s father passed down to him his collection of baseball  cards.  Immediately, LePage started to admire collecting baseball cards, and he and his father made it a routine hobby to open packs of baseball cards together.  However, the idea of  opening packs of baseball cards eventually turned into a much larger and time consuming hobby.  LePage is now an avid collector of autographed sports memorabilia.
“I started logging every single autograph I get in an excel spreadsheet” LePage said. “I’ve been logging since my first autograph on March 29, 2011, and currently have about 5,000 autographs.”
The first autographs for LePage came at Steinbrenner Field which is where the Yankees host Spring Training baseball in Tampa, Florida.
“My first autograph was of [former Yankee’s catcher] Fransisco Cervelli, but I also got [current Detroit Tiger] Miguel Cabrera on the same day.”
Ever since then, LePage has been sporadic in his method of collecting autographs. While attending baseball games is his most common way of getting autographs, he does have some other strategies.
“I go to baseball games, celebrity softball games, annual events such as pep rallies, team hotels, mail people cards, and the oddest one I have ever gotten was at a Speedway gas station in Indianapolis.”
A benefit for LePage when it comes to collecting autographs is he has gotten many special opportunities.
“I was really early once for a Twins spring training game, and they asked me if I wanted to batboy for their game which was fun.”
In addition to a chance to batboy during a spring training game, LePage has gotten the opportunity to travel with his family to many baseball stadiums throughout America in hopes of getting autographs.
“I go to spring training almost every year in Florida” LePage said. “But I have also been to Camden Yards in Baltimore, Comerica Park in Detroit, Progressive Field in Cleveland, Great American Ballpark in Cincinnati, PNC Park in Pittsburgh, and Busch Stadium in St. Louis.”
On the same note, LePage iterated that the process of getting autographs can be very time consuming and difficult.
“I sometimes spend 2-3 hours getting all the stuff ready that I want to take [to an event]  to get autographed.” LePage said. “At baseball games I am sometimes there for about 8 hours of my day in hopes to get autographs.”
LePage values many of his autographs, but was able to come up with a list of his ten most favorite autographs he owns. While most of them are baseball, there are some that fall into other categories as well.
“My top ten favorite autographs I own are Bryce Harper, Miguel Cabrera, Kyle Schwarber, Ernie Banks, Kris Bryant, Andrew Luck, Dirk Nowitzki, Senator John McCain, Justin Verlander, and Ozzie Smith.”
Despite all the hard work and effort put into collecting all these autographs, LePage still looks forward to continuing on with the hobby.
“The best part of getting autographs is that it is something I can do for years to come.”