Football looks to keep winning on road at North Central 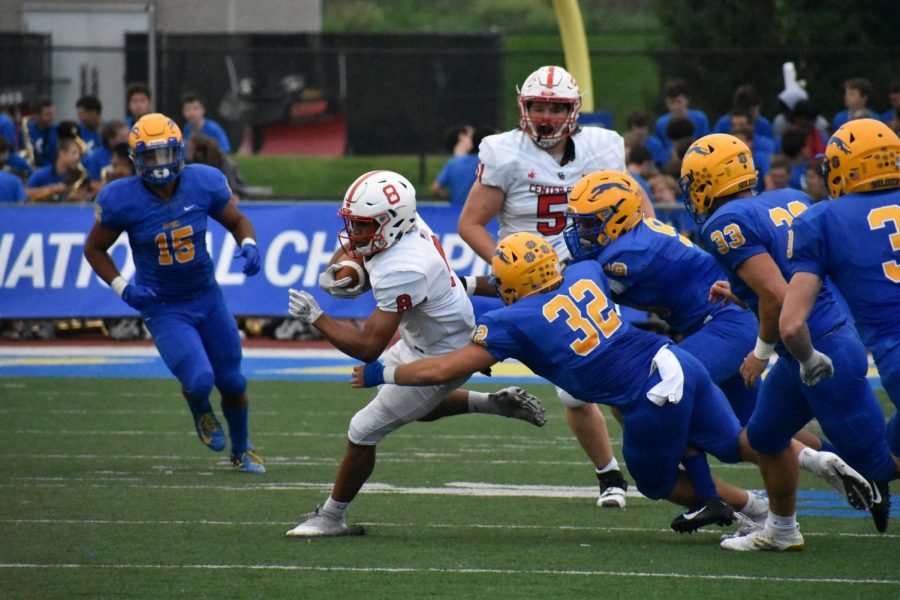 Tonight at 7 p.m on the North Central field, the Trojans look to bring home a win against the Panthers. After starting the season 0-3, Center Grove picked up its first win last week, defeating Ben Davis 48-20.

“We never have lost three games in a row and started 0-3, so that was tough to swallow but I think it helped build our character and I think it made our team just a better team in general,” head coach Eric Moore said. “Everyone took some responsibility and we got better. We had a great game against Ben Davis and won our first game.”

In last week’s game, Center Grove rushed for 333 yards, including 156 yards and two touchdowns by sophomore running back Daniel Weems. Quarterback Tayven Jackson threw for 65 yards and one touchdown, and he hopes last week’s success will carry over to tonight’s game.

“At first we started off at 0-3, so that affected us big time because that’s just not a good feeling to have,” said Jackson. “But, we won our first game last Friday, so that gave us a lot more confidence and boosted it to come out next game and play like we did and play as hard as we did [against Ben Davis].”

However, Coach Moore is aware of the North Central’s many strengths. Last year, when the team took on the Panthers, they lost 26-14. North Central returns safety Michael Brown, who averaged 12.8 tackles per game, finishing the season with a total of 153 tackles last year.

“They have great size and great speed, and they can score on every play on offense. Their defense runs the ball, and it’s very physical,” Moore said. “There’s not many weaknesses. It’s just that they have a couple injuries like we do and it might slow them down a little bit.”

Last week, North Central quarterback Harry Abell threw for 199 yards and four touchdowns. In order to slow down the Panthers’ air attack, Center Grove has focused on defense this week.

“On offense they have a really good quarterback and good wide receivers. They have a good tight end, he’s 6’6, so we will really have to step up and play well,” defensive back Matt Soderdahl said. “We’ve been practicing all week. We’ve been putting in different packages and a lot of different things to help cover receivers and help our defense play well.”

Running back Carson Steele, who is still looking for his first game action, thinks a win would show fans what the team is truly capable of.

“A win would really help the team out,” Steele said. “It will show people that they shouldn’t count out Center Grove to win state. We have just had a couple of bad games.”