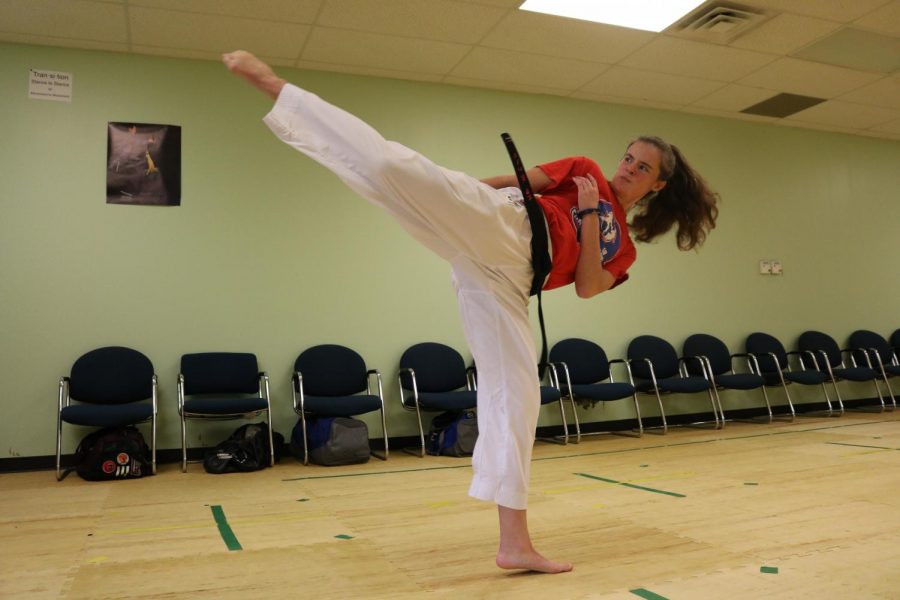 While some students spend their time running track or cheering for the football team, sophomore Emma Bohanon spends her time learning karate at Adamson’s Karate Studio.

“I do karate because I’ve always been into sports, but could never find any that I really liked and karate just appealed to me more than other sports,” Bohanon said.

A normal day at Bohanon’s studio not only includes extensive warm-ups and basic training, but also sparring with other students, practicing takedowns and using weapons such as large staffs and nunchucks.

“Doing weapons is my favorite part of karate. I feel that it is more practical than other things,” Bohanon said. “For instance, if I don’t have the ability to fight with my hands, I can use objects around me to fight.”

Bohanon’s teacher, Shihan Ryan Adamson, owns the studio and has been teaching for about 30 years. While Bohanon plans to continue learning under Adamson, she has other ideas for college.

“While I might try for a major in self defense in college, I would rather be a fire-fighter. Although karate can keep people healthy and fit, the only thing it would help me with would be kicking down doors and staying active,” Bohanon said.

Bohanon has been doing karate since May of 2015 and continues to train despite holding the rank of black belt.

“There is still so much to learn and I want to learn as much as I can in order to protect my friends and family,” Bohanon said.

Bohanon encourages others to try out karate. She says that many people will not only enjoy being able to protect loved ones and friends, but also the ability to stay fit and healthy. To learn more about Bohanon’s studio, go to https://www.adamsonkarate.com/.