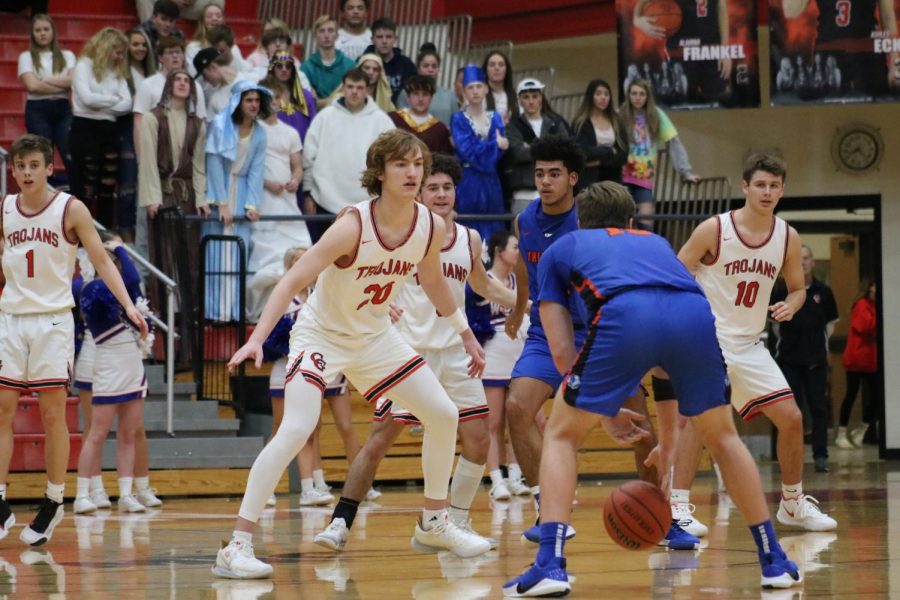 The boys basketball team hits the road to take on Carmel tonight at 7 p.m., and they are looking for a win. Last season, the Greyhounds defeated the Trojans 47-37; however, this time, they face the Carmel team without the home court advantage.

“Carmel is a really tall team that will match up well with our team’s height, and we plan on playing our game and winning the game with defense,” junior Charlie Bemis said. “Practice this week has been pretty normal with us focusing on ourselves and defense on Monday and Tuesday and starting to scout and plan for Carmel on Wednesday and Thursday. We are focusing mainly on playing team defense and moving the ball offensively. We are a tall and long team, and we are able to play great defense and get the ball out in transition for easy baskets.”

Looking to get their first MIC win under their belt, the Trojans are focusing on how to break down Carmel’s strengths and capitalize on their own.

“Carmel is a fundamental team: they play together, they share the ball and just really play as a team,” sophomore Tayven Jackson said. “They aren’t really selfish, so if anyone is left open they’ll hit it, which is tough to guard. But all we have to do is play solid and play as a team and we can beat them. Our biggest strengths are in transition. On the fast break we can pitch it ahead and go score. Our whole team is really athletic; we can all shoot and dribble, and it’s like five guards on the floor, which is nice for us. Coach Hahn knows how to put us in the right situations, so we have to take it from there and see what happens tonight.”

Having only a few players that were on the varsity roster last season, the Trojans are building their confidence and in need of strong leadership.

“There are some guys that are not experienced on varsity, so the guys that have that experience from last year need to step up and be a leader,” Jackson said.

The team is aware of the importance of winning the game tonight and what they need to do in order to come out on top.

“I think our defense is really strong. It’s improved a lot, and then our offense, we are moving the ball well and are finally clicking,” senior Ben Cooney said. “I mean this is a turnaround game, one of our big road tests, and if we win this game it means we can win any other game we play.”

The Trojans also have rivalry on their minds and are looking to avenge the football team’s fall to the Greyhounds during the state championship.

“There’s some football guys on the basketball team, and us beating Carmel today would give us a little lift since we lost to them in the state championship for football. I mean that’s why I’m going to play as hard as I can because I don’t want to lose to them three times in one year. It’s revenge.”