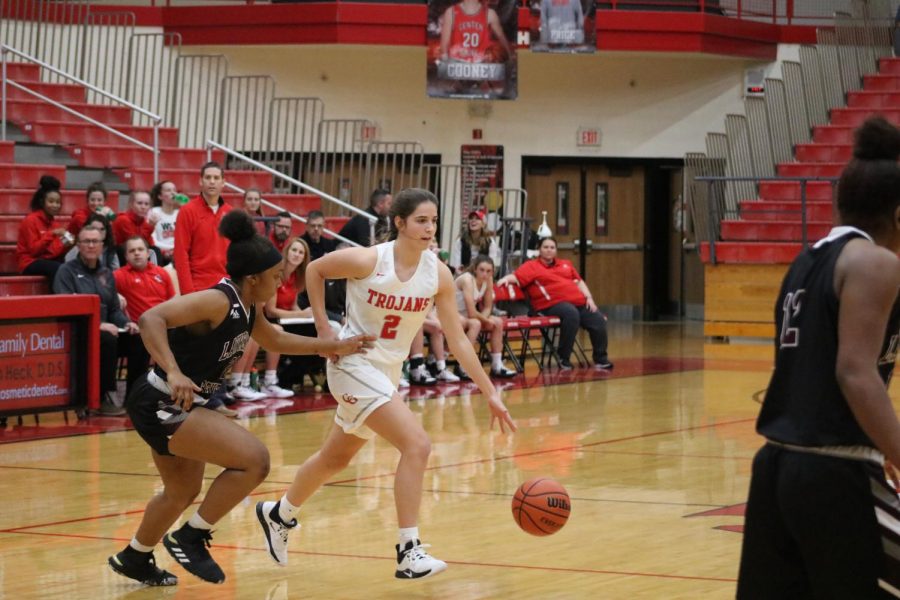 The girls basketball team is taking on MIC rival Carmel at home tonight. The Trojans are currently 14-2, county champs and undefeated in the MIC. The Greyhounds are 2-2 in the MIC, falling to Warren Central, which the Trojans decisively defeated earlier in the season. Although the team is confident in their abilities, they have been focused on how to break down their opponent’s strengths on the court.

“Carmel’s strengths are their height and ability to score,” senior captain Alainna Frankel said. “Their defense is very tough to get past because they are really good at getting deflections with their length. They are also very good shooters and able to post up in the paint. Our plan to compete is to move the ball quickly, forcing them to not be able to set their defense. We are wanting to stop their shooters by closing out hard and fast and having help in case we get beat 1 v. 1.”

The Trojans have been practicing on specific skills that they will need against Carmel, while still keeping the same level of intensity that they always do during practices.

“This week’s practice has been very competitive,” senior captain Ashley Eck said. “We have done defensive drills to help prepare for their offense. Also, we worked on guarding many of their sets to help us with our defense. Practice isn’t much different from normal because we do similar competitive drills and drills that help us focus on the intangibles. We have mostly focused on grabbing the ball strong on rebounds and do the little things. We also focused a lot on what Carmel does and how we can stop their offense and get through their defense.”

A key aspect to being successful in this game will be for the Trojans to capitalize on their own strengths that they’ve shown thus far and using them against a solid team such as Carmel.

“Our biggest strengths as a team are being able to turn our defense into offense by having good ball pressure and forcing turnovers,” senior captain Claire Rake said. “We are also good at being able to play at different speeds on offense. When we are executing all of our options on offense we are a hard team to guard. We’ve talked all week and said that as long as we are strong and composed with the ball we should be fine. If we play defense like we have shown we can then it should help with their size and hopefully make them turn the ball over.”

Looking to keep their 3-0 MIC record, which would put them closer to a conference championship, wanting to show off their hard work and simply wanting to beat a big rival at home, the team is well aware of the impact this win means for them both now and in the future.

“This game is important for us as a whole because we are competing for a MIC championship, and this game is another step forward in that,” Frankel said. “Also, Carmel has always been our rival, so we are determined to beat them at home. Other teams in the state have underestimated us all year and this is another chance to prove that we’ve earned everything we’ve accomplished.”