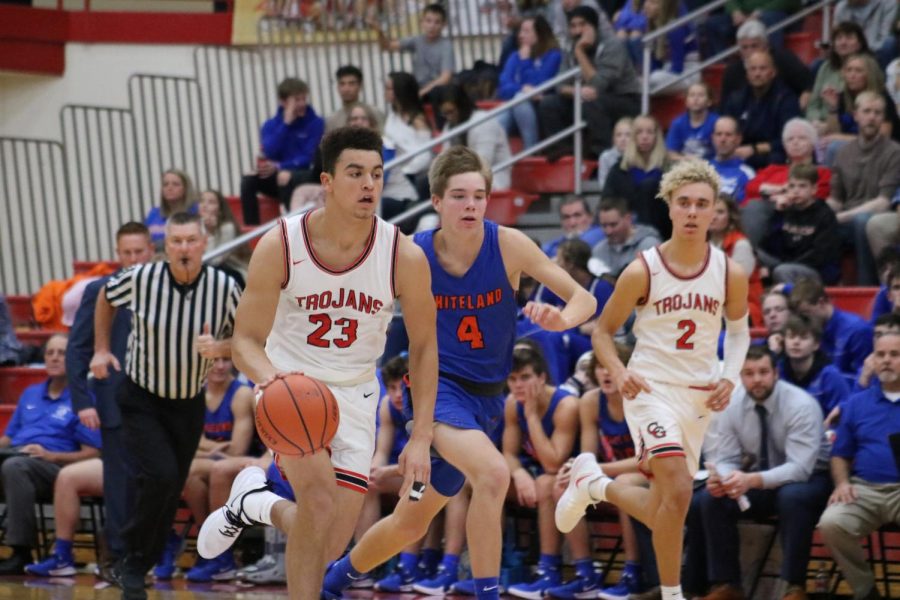 Junior Leyton Mcgovern dribbles the ball down the court during the Trojans' second match against Whiteland, followed closely by sophomore Tayven Jackson.

Center Grove faces off against Indian Creek at Franklin Community High School tonight at 7:30 p.m. in the semi-finals of the Johnson County Tournament.

Last week, Center Grove fell 53-44 at Carmel, but they are looking to build momentum tonight when they take on 10-1 Indian Creek. The last time Center Grove and Indian Creek, two years ago in the county tournament, it took overtime for the Trojans to win. As the two-time defending county champion, Coach Zach Hahn knows fans will be rooting for the upset.

“With every win that you have, it is a confidence builder,” Coach Zach Hahn said. “We need to continue to work on that every game. I think more than anything, knowing that mostly everyone in the gym will be rooting against [Center Grove], I hope they embrace that and feel great energy from that.”

In order to advance to the championship game and a potential match-up with former Center Grove Guard Jonny Marlin’s Greenwood Christian team, the Trojans will have to overcome Indian Creek’s risk-taking zone defense.

“They gamble on defense a lot so we can expose that with offense,” junior Austin Booker said. “If we exploit that, we have a better chance of winning.”

On the defensive side, Center Grove will look to slow down an Indian Creek offense that averages over 70 points per game.

A win at county could give the Trojans momentum moving forward in the season, but there is another reason the team is looking to defend their county title.

“A win at county would mean a lot because a lot of people are doubting us,” sophomore Tayven Jackson said. “Personally, I don’t know why, but winning this would be great. We need to stay together and play together if we want to come out on top and show everyone what we can do.”