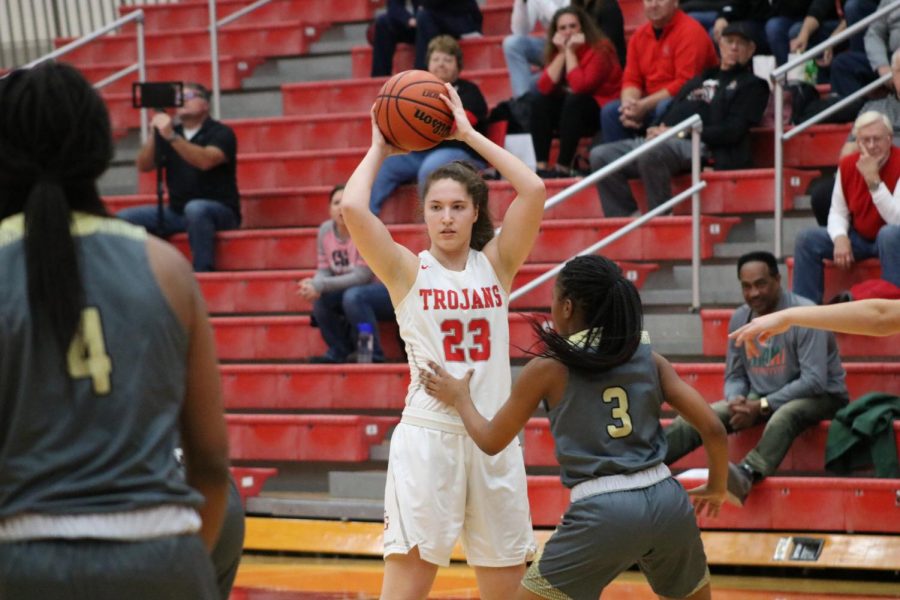 Senior Claire Rake looks to pass to a teammate during their game against Warren Central.

After a close loss last season at Lawrence North, the Lady Trojans are looking to redeem themselves tonight when they match up against No. 5/6 Lawrence North in the final regular-season game. The team has been preparing all week for what they know will be tough competition.

“This week, practice has been even more competitive than usual. We have mostly worked on one-on-one defense, rebounding and being smart with the ball,” senior Claire Rake said.

Coach Kevin Stuckmeyer said Lawrence North will be one of the team’s most challenging match ups of the year.

“They’re probably, if not the most talented team we’ve faced, one of two or three. They were in the state finals last year and they haven’t lost in our conference, so they’ve already won the conference outright,” Stuckmeyer said. “They’re obviously an elite team that we have to play against.”

However, the Lady Trojans have focused on defense heading in to tonight’s game.

“They’re extremely athletic and extremely skilled, so the biggest thing is keeping them in front and not letting them get dribble penetration because that’s where they really generate a lot of their offense by driving it and getting their defense to over help,” Stuckmeyer said.

“Their strengths are that they have a very talented, long, and athletic straying five,” senior Emily Rake said. “We need to attack and get quick reversals on offense. On defense, we just need to stay in the gaps so they can’t get the ball around fast and not let them drive middle.”

Because it’s the last game of the regular season, the team is hungry to get a statement win and build momentum heading into next week’s post-season play.

“It would be great, ending on a high note before sectionals. Not to mention, we haven’t beat LN in nearly 7 years, so it would be a big win for us,” Wilson said.

For the seniors, this one means just a little bit more.

“It would mean so much to me to end my last regular-season game at CG with a win. It would be on our home court against the No. 1 team in the state,” Emily said. “I think it would bring us confidence, hype, and prove that all the hard work we’ve put in has paid off.”