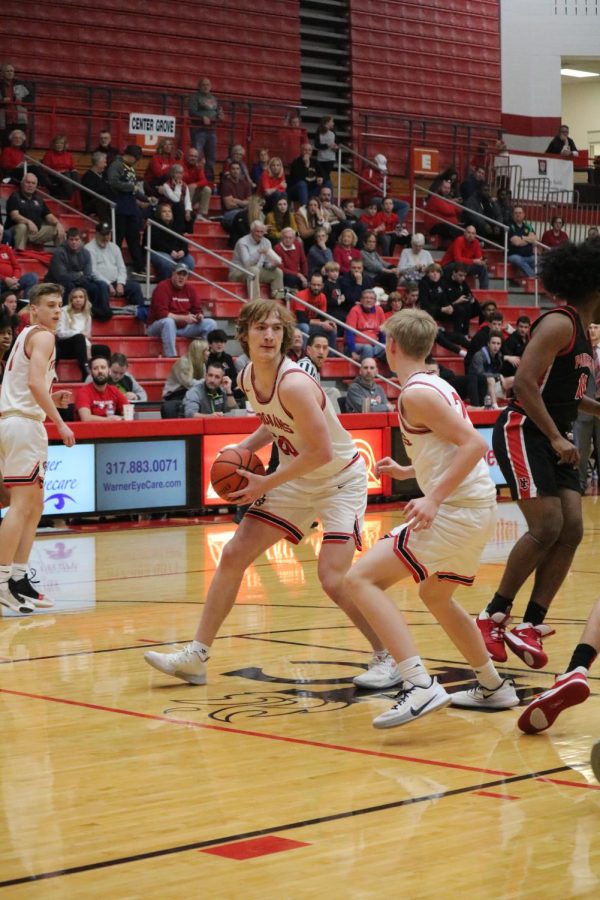 Senior Ben Cooney plays in a game against North Central.

When the boys basketball team hosts Brownsburg tonight at 7 p.m., they will be celebrating Senior Night for their one and only senior: Ben Cooney. Cooney has been with the program for four years, and according to his coach and teammates, he’s left a remarkable footprint.

“He’s made a big difference through his hard work and dedication. Every day he comes ready to play,” Coach Zach Hahn said.

But Hahn isn’t the only one who’s noticed Cooney’s work ethic; his teammates see it, too.

“He’s really done a great job being that guy on the team that’s always consistent and on top of it,” junior Ethan Jones said.

Additionally, Hahn says the senior has improved significantly over the last four years.

“I mean, he’s grown tremendously as a basketball player. When you look back in 8th grade, he was on the B team, and now he’s starting varsity as a senior, and he contributed last year to a semi-state team, so he’s grown a lot basketball wise,” Hahn said. “He’s turned into a versatile player who can do so much on the court. He’s also grown maturity wise. He really showed some maturity and dedication this off season and this summer. He got a lot stronger in the weight room and put in a lot of time trying to become more athletic. I think he’s just been led by hard work over this past year.”

Jones said that Cooney is one of very few that started the season with any experience at the varsity level.

“He’s done a great job stepping up as our only senior, especially with having almost none of our players having varsity experience last year. He’s really shown us what it takes to be an asset in that regard,” Jones said. “He’s always a positive force on the team. He’s just a great locker room presence and fun to have around. I really don’t think I’ve ever seen him get down on any guys or disrespect anyone and that just shows how he leads by example.”

Hahn also noted that Cooney has developed into a leader on the team.

“I’ve seen him grow as a leader. He leads by example every day, he comes in and practices hard and I think he knows this is his last year so he wants to go out and play the best basketball that he can as a senior,” Hahn said. “We have seen a big change in his energy level and effort every day. [He’s] just trying to get the team to play the best basketball they can by sectional time.”

Jones and Cooney have a lot in common as players, which has strengthened their bond on and off the court.

“Cooney and I have gotten a lot closer over the past year or so. We play the same position, so we’re always giving each other pointers and hyping each other up. It’s going to be weird not having him around next year,” Jones said. “I also want to thank him for the fact that Hahn will always have to live knowing that Cooney never cut his hair.”

Hahn shares what he’ll miss the most about his player, along with some bittersweet moments with him that he’ll never forget.

“His personality is contagious to everyone around him. He’s always so outgoing and fun, and it rubbed off on the other guys,” Hahn said. “I think something memorable for me and especially for him was getting his first dunk against Warren Central. That was pretty special. There were a couple times I remember him getting big blocks and sending it into the crowd, which always sparked a lot of emotion.

Though Cooney has always loved the game, he makes it evident what has been most important to him over the last four years in the program.

“I’ll miss playing the game but also all the friendships I’ve created just as much if not more. These guys have become like my family and it’s going to be tough to leave them,” Cooney said.

Although he’s learned a lot playing in the Vandy Gym, the lone senior said one takeaway from putting on a Trojan jersey stands out.

“Work as hard as you can every chance you get. Don’t let yourself walk out regretting anything,” Cooney said.