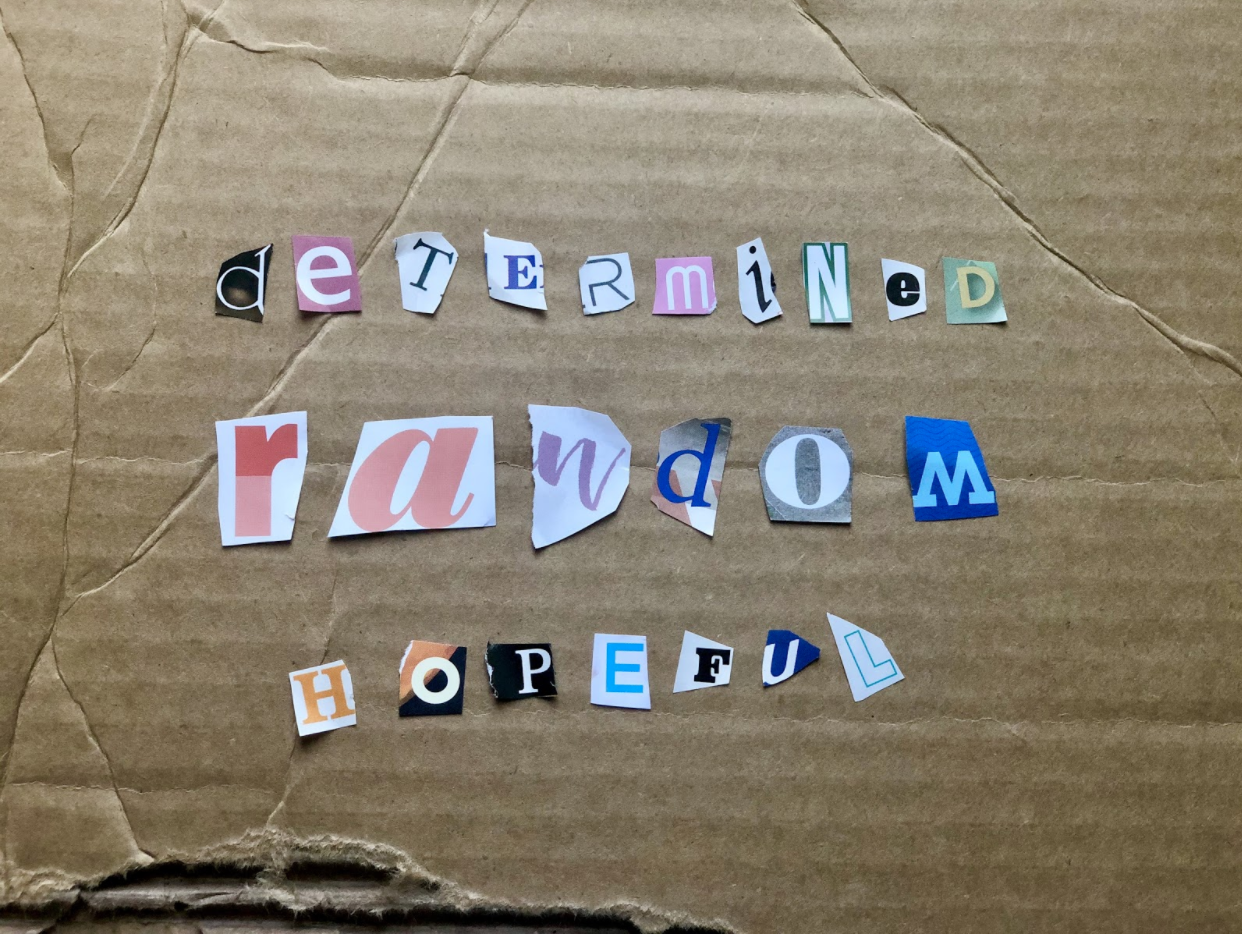 Three words sit upon a cardboard canvas. Each word corresponds to a student’s feelings on the future of the respective group and what they are doing to persist through the age of quarantine. Honors English student Mitul Patel, who assisted in a class activity to boost morale, aptly used random to show his feelings on the project. Grant Embrey of the robotics team used his word as appreciation for the work of the team’s mentors, who have recently started online “contests” to keep robotics in the minds of the club members.

“[The contests] make me hopeful that engineering can persist through hard times,” said Embrey.

Ultimate frisbee team member Matt McRoberts described his, and the team’s, attitude towards next season as determined to move past the heartbreak of this year.

Along with countless businesses, workplaces and gatherings being shut down due to the COVID-19 pandemic, school functions that are integral to many students’ social worlds are also being put on hold. The robotics team, which had been working nonstop for their state competition, recently learned of the news regarding their season.

“It was going pretty well. We had a lot of momentum coming out of our first competition to roll with and keep working [on],” team Executive Captain and senior Chase Rivas said. “We had some good plans but it was canceled quickly before we had a chance to get a start on them. It was about 9 and a half weeks before our first competition and we had at least 22 hours of meetings a week.”

The team saw their 209 hours worth of hard work pay off in their Bloomington competition on March 6-8.

“We ended up as the ninth ranked for our robot and competed in finals but lost in the first round,” Rivas said. “We won the Chairman’s Award, which is the most prestigious award a team could win, and [that] qualified us for state.”

However, due to concerns over COVID-19, the state competition was canceled.

“I mean, it really sucked. I’ve been in the robotics program at CG for many years, [even] outside of high school, so all of my time [was] culminating to this. This is definitely not how I wished it to be,” said Rivas.

I mean, it really sucked. I’ve been in the robotics program at CG for many years, [even] outside of high school, so all of my time [was] culminating to this. This is definitely not how I wished it to be.”

Leanna Sequeira of the ultimate frisbee team, who, like Rivas, is a senior, will not get another chance to take the field as a Trojan. The ultimate spring season had just started when she received the news.

“I am disappointed that I won’t be able to play during my last year of high school or have a senior night. I had a lot of plans for how my senior year would go ultimate-wise and how I would play, and I had worked really hard this whole year to prepare for this season. So when it ended up being cut short, that was hard,” Sequeira said.

Along with the disappointment Sequeira experienced as a senior, she said she also felt for the new members of the team who couldn’t fully experience their inaugural season. The team had only participated in two tournaments when the season was canceled.

“We have a lot of people who are new to ultimate this year, so a lot of people were disappointed that they wouldn’t get to experience our true competitive season, go to tournaments and travel with the team,” Sequeira said.

It was not only students blindsided by this new reality of social distancing, as teachers had to quickly restructure an entire semester of instruction; this meant reformatting and cutting some of their favorite lessons. English teacher Shiela Bickley said she has lost her favorite time of the year.

“A teacher online was talking about how March to the end of the year is a magical time. I was already talking to my teacher colleagues after winter break about how much I loved the comfort of second semester,” Bickley said. “My freshmen have figured me out, they know the routines, we are feeling comfortable with each [other], and so the best work of the year takes place. That has been stolen from us this year in many ways.  And the last book of the year, The Book Thief, is my favorite and one that most students really enjoy reading and discussing.”

Bickley said the new reality of at-home assignments lacks what she loves about teaching.

“The hardest part for me in changing to online school has been setting some kind of routine. My favorite part of school is the interaction with students and between students. It felt really weird to be trying to figure out what to do now in such a quiet space at home,” Bickley said.

The hardest part for me in changing to online school has been setting some kind of routine. My favorite part of school is the interaction with students and between students. It felt really weird to be trying to figure out what to do now in such a quiet space at home.”

While high school ultimate frisbee may be over for senior team members like Sequeira, the underclassmen are looking to the future. Freshman Matt McRoberts is already setting goals for his sophomore year, including making a return to the state championship.

“My hopes for next season are that we can overcome this setback and work even harder to achieve our new goals for next year’s season,” he said.

He thinks unity and practice are key to the team’s recovery.

“I’m still getting ready for next year’s season,” McRoberts said. “We will just need to look forward to next season and start working towards getting better. I just want us to work as a team.”

Amidst the boredom, sadness and outrage of the new everyday, clubs and teachers at CG have found ways to adapt the classrooms, corridors, and canvases to adhere to social distancing.

The robotics team mentors have started creating their own “challenges” to make up for the lost work time and prepare for the potential chance for summer competitions. Freshman Grant Embrey hopes the challenges can keep the morale of the team up.

“Something really cool our mentors are doing is holding regular team competitions, such as design contests, to keep morale up. We have only had one so far, and it is a challenge to create the best team button design, but the mentors have promised [the challenges] should be fairly regular, and should be pretty fun,” Embrey said.

He also hopes the team can move forward in the next season, and accomplish the massive goal of reaching the FIRST Robotics Worlds competition.

“I hope that our team can improve on our build process, despite losing a great senior class, and also that we get the opportunity to compete in more competitions and hopefully do well. An overarching goal would probably be to get to Worlds next year,” Embrey said.

A classroom tradition for Bickley’s students was the “random”, a short mental break to help start off the period.

“I wanted a fun way to start class, get everyone’s attention, and hopefully make them think. I started out calling them ‘funnies,’ but inevitably someone would say, that’s not funny, and that pretty much killed the mood. So I started calling them ‘randoms’ because no one could say they weren’t random!” Bickley said. “In class they are riddles, puns, jokes, cartoons, and sometimes videos. Every once in a while they are directly related to class content, but most of the time they are just a random word puzzle or joke to kick off class.

To replicate the daily procedure, Bickley called upon her students -as well as her son in California- to find an array of videos and riddles to post on her Canvas class.

“At first I thought that I would just post something for each class day, but then I thought having [a random] for every day would let students know I am still thinking about them and hoping they are having some fun. Plus, any time I’m not doing school work, I’m basically looking at memes and cat videos, right, so it was fun to share!”

Mitul Patel was one such student. He suggested an entire YouTube channel that compiles random clips for the online archive.

While our routines are going wacky and improper, having a taste [of normalcy], even one little thing like this, makes quarantine seem more like how life used to be. It helps us keep our sanity in a time where that seems impossible”

“While our routines are going wacky and improper, having a taste [of normalcy], even one little thing like this, makes quarantine seem more like how life used to be. It helps us keep our sanity in a time where that seems impossible,” Patel said.

Bickley wants her students to keep the tradition alive.

“I hope students will keep sharing! I know (and my students know) I have a weird sense of humor, and it’s fun to see what individual students find funny and interesting,” said Bickley.

When e-learning can seem daunting for students, she wants her pupils to keep staying “random”.