From India to Indiana

A sophomore's journey half-way across the globe 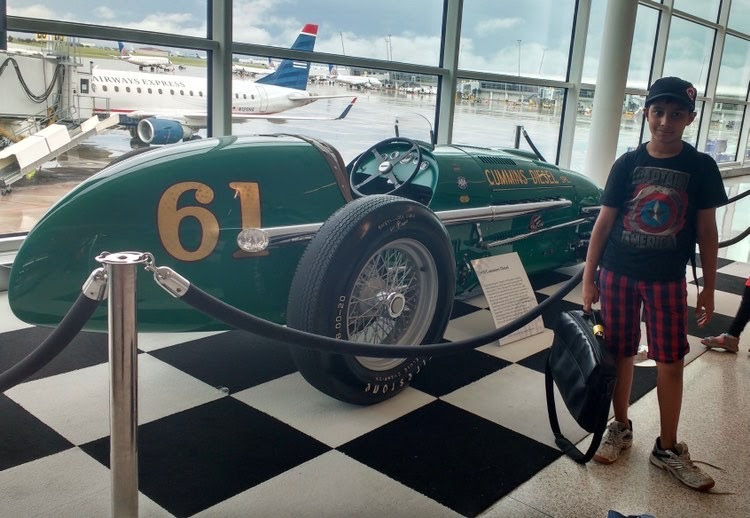 Sporting Captian America apparel, a then 11-year-old Tarun Modekurty poses for one of his first pictures on US soil.

It is a gloomy Chicago morning around 11 a.m. While the rain might make a day dreary or boring for some, this day is quite different for sophomore Tarun Modekurty. After spending 15 hours in a plane and traveling 7,000 miles across the globe, he is finally standing in a new country, one he has never visited before, and one that will become his new home.

Modekurty immigrated from New Delhi, India to the United States in 2016. He lived in India for his first 11 years, prior to his move halfway across the world. While it was his first time in the US, he had family here before.

“My dad has had multiple work trips to the United States before,” Modekurty said. “The first time he went was six months, second time was a year, and the third time was two and a half years, and this time it was supposed to be longer, so he thought it was a good option to bring his family along.”

Modekurty’s first few days and months in the United States were fairly hectic. He and his family faced several problems at first.

“The first couple days, we had a problem with the health insurance company, so the first couple months I was just inside the apartment. I wasn’t allowed to go outside, just in case anything were to happen to me,” Modekurty said. “My dad didn’t have a car, so we used public transit mostly.”

Once Modekurty was finally allowed to travel around, the first place that he visited, other than the airport, would always stick out in his mind.

“The public library was the first place I visited, and it was much different. I had never been to a public library in India, so it was a very different experience. Like I saw that there were movies you could check out, and all that kind of stuff,” Modekurty said. “I got a card, and the first book I checked out was about American history.”

American history wasn’t the only thing Modekurty would learn; he realized many of the practical parts of city life were different to what he was used to.

“Infrastructures are different, public transit systems are different, the cars are a bit different, so almost everything is different,” Modekurty said. “Walking around the streets and sidewalks is something that I had not previously done, because India is a really crowded country, so there isn’t much room to walk around on the streets. Within the first few months, I visited a church for the first time, that is definitely something I’ll never forget. Currency is a really important part of any infrastructure, and the first time I handled money was at a popcorn shop in the Chicago airport, and then I used a couple of quarters to make a call to my dad.”

Even though Modekurty has become well acclimated to the U.S., that does not mean that he does not miss the connections he made in India.

“I haven’t been to India in five years, and my grandfather passed away when I was over here,” Modekurty said. “When he was diagnosed, he had third stage Lymphoma in November of 2018, so that was hard to go through because I’m all the way over here, over 7,000 miles away from my home country, and I really miss my friends and my family. All we do is FaceTime, but we know that FaceTime can’t really match in person meetings.”

While Modekurty first moved to the US in 2016, he did not move to Center Grove until 2019. He previously lived in Columbus, Indiana because his father had a contract with Cummins. Moving so often in only three years, combined with the challenges presented by a completely new country, caused him to face numerous difficulties.

“My first school was not super friendly,” Modekurty said. “My accent, you can still pick up like a slight hand. It’s not too obvious, but when I first came here it was very obvious. I had a hard time fitting in; I couldn’t find any friends. The only people I knew were other Indian people, and my teachers had a hard time understanding me because of my accent.”

As time has gone on, the pressures posed by making a move as drastic as his began to subside, but they never completely went away.

“I won’t say that I feel the pressures, but they aren’t completely gone,” Modekurty said. “Anybody talking to me can obviously tell that I’m not from the United States. There are parts like my ‘R’s where you can really tell that I’m not natively speaking with this accent, it doesn’t come out as much but it’s still there, but I’m definitely not as insecure as before.”

Another stress that weighs on Modekurty is the US Visa system.

“The way the visa system works is that you get a preliminary visa for a few years, and then it extends as you go on, so mine has been extended a couple of times. But if I go to India, there is a chance of me not returning,” Modekurty said. “My dad’s company is the one who pays for the visa, pays for the tickets and all that kind of stuff. But with all the cuts we are seeing in our daily lives, that seems to be at risk because I’m not an American citizen. I’ll still be considered an international student when I go to college, and for that you have to get a special visa.”

While some think it is easy to immigrate to the US, this is most certainly not true for Indian immigrants to this country.

“What you first do is you get a green card, which establishes that you are a permanent citizen, not an American citizen. You are a permanent resident, which at that point you’re processed. So to get a green card, because Indians have a really high rate of immigration, takes about five years. When you get it, you have to stay in the US for another fifteen years to be eligible for citizenship,” Modekurty said. “So the hard part really is to get the green card, and then you get citizenship, and then the naturalization process begins. When all of that happens, I’ll be over the age of 21. It wouldn’t apply to me because when you turn 21, you are no longer under your parents’ visa or any of their dependencies, according to legal documents, so what that means is I’m basically out for myself.”

Even though Modekurty faces challenges, he also appreciates the opportunities the US has given him.

“They say that America is the land of opportunities,” Modekurty said. “The career-specific classes that are offered in high school are not available in India. Everyone takes the same classes until you are graduating, and then you really acquire the skills you need after you go to college; if you would be comparing that with the education system in the United States, I’m already taking computer science classes. I’m taking AP computer science principles, cyber-security, which is the path I want to go to, so career preparation starts much more advanced in the United States than it does in India.”