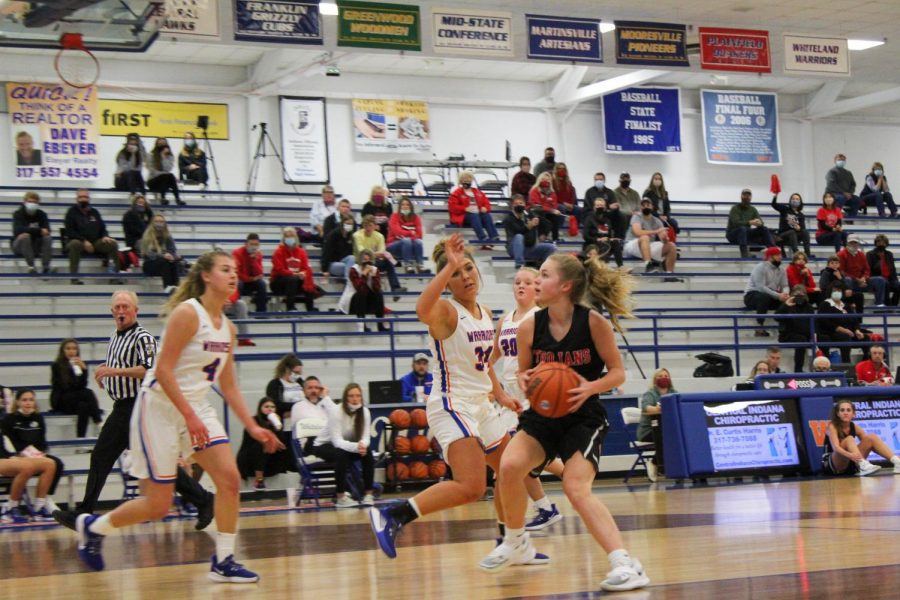 During the county championship game against Whiteland, Ella Hobson drives to the basket.

Center Grove takes on Bloomington South tonight at 6:30 p.m. after a 42-40 win against Plainfield on Tuesday. Center Grove has won its past two games, including a 49-26 conference victory over Lawrence Central last Friday.

Senior Mary Wilson says the team will look to continue the streak of good play.

“We just need to stick to our standards and build off of how we’ve been playing recently,” Wilson said.

Heading into tonight’s game, freshman Aubrie Booker says the team has been focused on overall better team defense in the film room and in practice.

“In film [this week] there wasn’t a specific girl we focused on but as a whole solid team,” Booker said. “We have to play much better defense than last game — closing out, better rotation and talking. If we accomplish those things, then we will be able to limit their good shots.”

Sophomore Ella Hobson also stressed the importance of defense for a win against Bloomington South. The 5’4 point guard says perimeter defense is key.

“Closing out on all of their shooters is the key; they are all really capable and really good at hitting shots,” Hobson said. “We also just need to focus on us and play how we play and get it done.”

“To improve our rebounding we just need to attack with a hip and be more aggressive on the boards,” Wilson said.

“Anytime we can get a win, even an ugly win, it’s good for the team,” Booker said. “A win versus Bloomington South would mean we are continuing to improve and play tough snd consistent basketball.We have to continue to work on all of the small things we struggle doing and get better so that we can compete in the MIC and peak when it’s time for the playoffs to begin.”