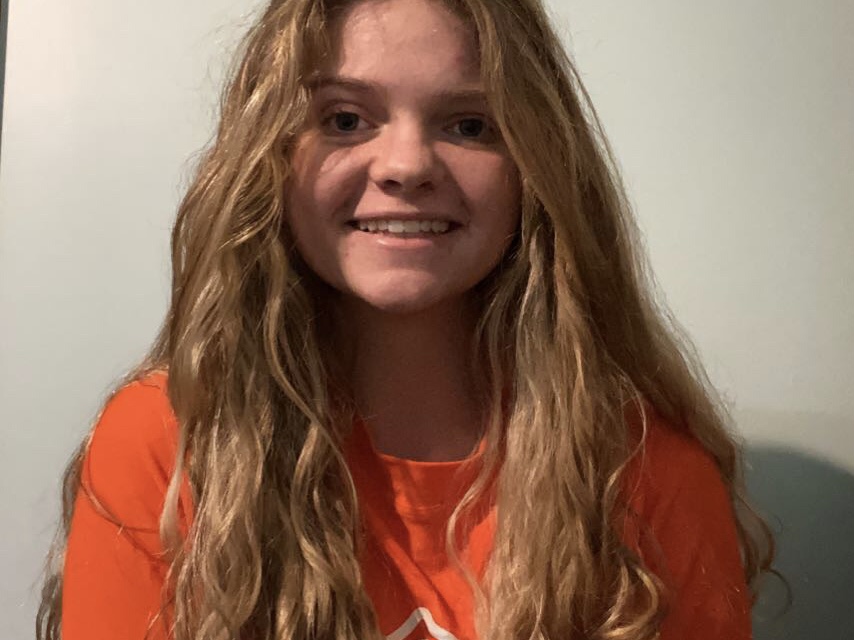 Junior Shayla O’Connor never thought she would find herself teaching swim lessons, never having been involved in swim herself. But, when O’Connor began looking for a new job in summer 2020 after previously having worked in fast food, she knew she wanted something more hands-on.

“I was looking for a new job because I was planning on quitting my old one. It was in fast food, and that wasn’t really for me. I wanted something more hands-on, and that went with my availability,” O’Connor said.

When O’Connor discovered Goldfish Swim School, which offers swim lessons to teach children ages four months to twelve years old life-saving skills, as well as technical aspects of swimming, she knew that she had definitely found a hands-on job. O’Connor applied, and got an interview.

After the interview, O’Connor was hired and began training. Having never been involved in swimming, training did not come without a learning curve.

“Going into it, I didn’t know anything about swimming, like the difference between breaststroke and freestyle. I learned how to do each stroke so I could demonstrate it for the kids. I also learned what to look for, so I could effectively critique the kids,” O’Connor said.

O’Connor began the training process out of water, first watching videos about different skills and different levels. She then observed lessons on deck, and eventually got in the water on her third shift to shadow other teachers and their lessons.

“I first got in the water on my third shift. I didn’t participate all that much, it was more to just learn the manipulations,” said O’Connor.

As training went on, O’Connor eventually taught more and more of the lessons herself.

“The in-water training was really fun. I got to hang out with the kids and learn and try the manipulations. They basically just took it day by day, giving me more control of the classes as we went,” O’Connor said. “It was probably my 10th shift when I was in the water without anyone looking over my shoulder.”

Along with learning how to become a swim teacher, O’Connor was also required to complete lifeguard certification training. During the course of the program O’Connor completed online training, which went over multiple situations and emergencies, in preparation for the in-person portion of the program, where the skills were applied.

“The online part is best described as online Driver’s Ed. That’s literally what it was, except it went over what we needed to know about lifeguarding. The in-person portion of it was easily my favorite part. The first day we focused on CPR and choking and we went through the Emergency Action Protocol (EAP). The second day, my favorite, we were in-water and we did the actual saves with the tube which was fun because we practiced on each other. Then we also learned saves with the backboard in case of a spinal injury,” O’Connor said.

After completing all of the required training, O’Connor began to teach lessons by herself, as well as serving as a lifeguard at the swim school.

“My main responsibility is to keep the kids safe there and outside of the swim school. As a lifeguard obviously I need to stay focused and alert and make sure everyone is safe, but as a teacher I need to make sure my kids will know how to save themselves if they ever fall in,” O’Connor said. “But past all of that, I have to make it fun for them because they will never learn unless they’re having fun.”

O’Connor has enjoyed working at Goldfish Swim school for the past five months. She said she loves the positive, encouraging environment for both the kids and her.

“I love to work there because of the kids and staff. Everyone working there is really fun and easygoing, and the kids are always so much fun to work with. I also love the building. When you walk inside you know this place was made for kids,” O’Connor said.

Not only does she love what she does, the job has also been a learning experience for O’Connor. The job provides opportunities for learning about swimming, but also life lessons as well.

“I have learned how to do more technical skills when swimming, but I have also learned how to be a lot more patient,” O’Connor said. “Some of the kids we teach are terrified of water, so being patient and empathetic with them is really important.”