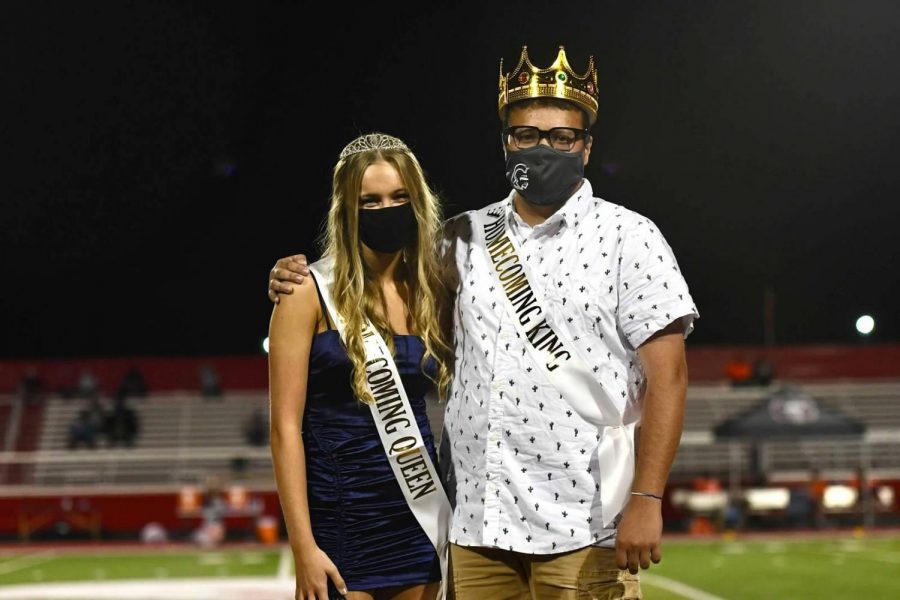 Sam Venegas poses at the Homecoming game after being crowned king of the senior class.

“He is very likeable, helpful, joyful and friendly. He’s just a great person all around,” senior Aaron McDaniel, captain of the boys soccer team, said.

“He truly lights up a room with his presence. He never fails to make you laugh or smile with his jokes or comments,” junior Jeet Kekre, associate advisor of Best Buddies and member of the soccer team, said. “He isn’t a quitter and when he does something, he puts all of his effort into it.”

“He gets a lot of people involved in activities, and brings positive energy to the people he hangs out with,” sophomore player Griffin Hennessy said.

He is senior Sam Venegas, who has developed a reputation of being supportive. From pumping up the boys soccer team with a pre-game speech and his signature back massage, to simply greeting his friends with a “hello” and a smile in the hallway, Venegas always looks for a way to offer support.

“I manage basketball, this year I’m doing softball and I do unified track,” he said. “I am in charge of the Best Buddies. It’s called an officer, and it’s my first year. We get to have these morning meetings, those are pretty cool. We talk about what we can do for seasons.”

“I originally met Sam the summer before my freshman year at the high school soccer practices,” Kekre said. “I really had no opinion of him at first, but I began to see how well-liked he was and that he would push himself in every drill we did, regardless of his skill in said drill. He is a friendly guy, so I talked to him, and he was always nice to be around.”

Kekre and Venegas would eventually become buddies, as friends on the soccer team and in the Best Buddies club. The two currently serve in leadership roles.

“There are two associate advisors, Felipe Kroll being the other, and we are in charge of all associates in Best Buddies. These are people who aren’t paired one-on-one with a buddy, but still participate in events. My role is to overlook and communicate with them to make sure they’re active in the club,” Kekre said. “Sammy is the Buddy Director, so he adds input in our meetings of what the buddies are feeling and helps make decisions regarding events. He also is in charge of communicating with buddies to participate.”

In the club, Kekre gets to see how Venegas supports his peers firsthand.

“He always has a positive attitude and tells jokes that can bring laughter to a room. In Best Buddies, he is always participating and encourages other people to participate. Just his presence makes people want to participate,” Kekre said. “Last year, we had an activity where we painted rocks, and Sam kept going to different people and talking about the rocks and was heavily interested in every person’s rock. He didn’t realize it, but his friendliness was well-appreciated by everyone there.”

Venegas’ favorite memories of Best Buddies are those where he gets a chance to truly connect with the people in the club.

“We have these season parties. Last year, we had a Halloween party, we got to dress up, dance, eat and hang out. Me and my buddy chose to go as Shaggy and Scooby,” Venegas said. “The Thanksgiving feast is where we get all connected, and eat Thanksgiving food.”

As an athletic team manager, Venegas has different responsibilities than he does in Best Buddies.

However, he makes it a priority to bring his positive attitude to the team in other ways.

“Every day at practice, we always bond a lot. We mess around; we talk, just regular stuff,” Venegas said. “I say some jokes, or say something funny. I try not to let them get down. I try to get them pumped up. Really, I just be me.”

His presence is felt by members of the soccer team. Venegas makes a point to visit each member of the team at their other sporting events as a show of support. Senior captain Aaron McDaniel has noticed other ways that Venegas shares his positive attitude with the soccer players.

“When we have Sam with us at practice, it’s always fun,” McDaniel said. “If someone did something wrong, Sam would always make sure they knew about it. Also, Sam always goes up to each person in the hallway at school. He goes up and pats you on the shoulder and says ‘hi’. He always brings happiness and joy to the team each and every day.”

Venegas takes inspiration from the shows of support around him, no matter how small the gesture.

“Last year, when we lost, my mom was there for me; she hugged me after the game,” Venegas said. “The fans are incredible. They cheer us on no matter what happens. They congratulate us and try to keep us with a positive attitude.”

Additionally, he recognizes that his buddy Kekre has the same regard for support that he has.

“Jeet is someone important to me. He’s really nice, he’s a good friend and cares about others,” Venegas said. “Being around him a lot has helped to get to know him better.”

Recently, Venegas received recognition for his own positive impact when he was elected Homecoming King.

“It was definitely a surprise. I was excited because it was my first time being Homecoming King!” Venegas said. “When I first got to the game, I was totally fine, but the second half, I got a little nervous. I definitely enjoyed it.”

Kekre, however, has recognized Venegas’ ability to bring joy for as long as he has known him.

“Whether you know Sam or not, you can always talk to him and he’ll make you feel as if you’ve been friends for ages. And if there is one kid you can count on, it is Sam Venegas.”