Boys basketball takes on Evansville Reitz in first round of regionals 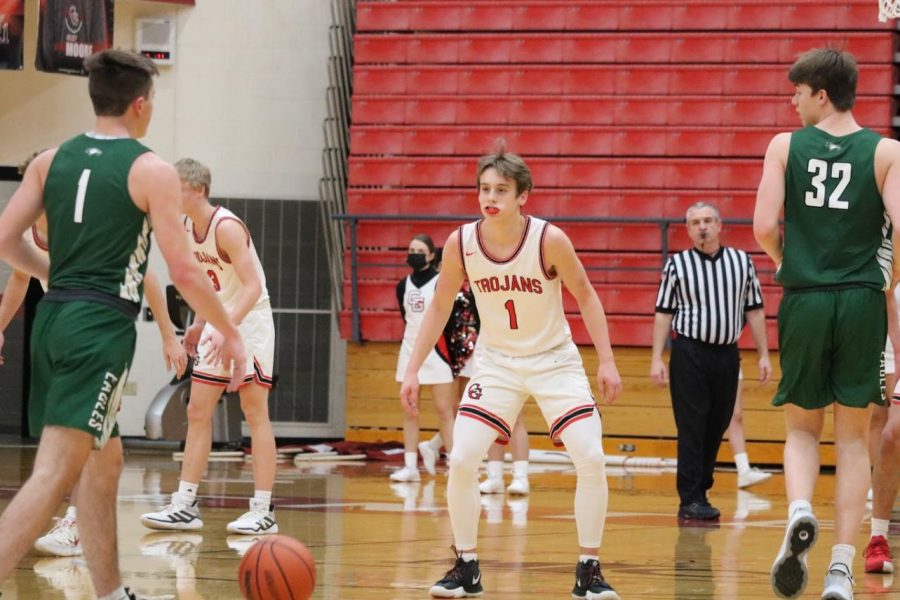 Senior Landin Hacker defends against a Zionsville ball-handler during the Trojans' 49-33 win on Feb. 9.

After defeating Greenwood 41-35 to win the sectional championship, the boys basketball team looks to continue their winning streak against Evansville Reitz in the opening round of regionals Saturday morning at Seymour.

Evansville Reitz, led by senior Owen Dease, is coming off a 67-54 victory over Evansville Central. Dease is a 6-foot-7 wing, who has a strong shooting ability, sinking two threes against Evansville Central and dropping 20 points in total.

However, the Trojans are able to rotate junior Tayven Jackson, sophomore Marcus Ankney and junior Tyler Cerny to guard Dease. The Trojans could also look to junior Jordan Vaughns to defend Dease when the starters take a breather or get into foul trouble. Vaughns finished the sectional championship game guarding Greenwood’s Rasheed Elemikan and held him to only 13 points.

Center Grove senior Landin Hacker, who sealed the game against Greenwood with a layup, is the starting point guard for the Trojans and will likely have to deal with McHugh’s stealing ability while running the offense for the Trojans. Hacker believes he will be a big part of the offensive game plan against Evansville Reitz.

“Moving the ball on offense and not taking one pass shots is our offensive game plan,” Hacker said. “I will be a big part of our offense by making plays and off ball screens. I will also be a big part by making a pass for a layup or a kick out three or even a score for myself.”

If Center Grove manages to get past Evansville Reitz, they will take on either Bloomington South or Jeffersonville in the title game.

Cerny believes perimeter defense is going to be a key for a win against Bloomington South.

“Against good three-point shooting teams we need to really extend our defense beyond the three-point line. We have to always have a hand up when our man catches the ball. If we contest a majority of their shots behind the arc, then it will be very difficult for them to score,” Cerny said.

The Panthers also are a well-rounded rebounding team more than doubling Bloomington North with a 30-14 rebounding margin. If the Trojans want to scrape out a win, junior Shane Bennett believes being dominant on the boards is important.

“Rebounding is important for us and for great teams because it helps us control the game,” Bennett said. “Us being able to keep teams off the glass eliminates possible extra possessions they can have and us getting offensive rebounds keeps the ball in our hands, which is what we want so we can dictate the game.”

Jeffersonville is also on a winning streak coming off a 57-53 victory over Bedford North Lawrence in the sectional championship and winning nine straight. The Devils senior Jaylen Fairman scored 18 points against Bedford North Lawrence, while junior Brandon Rayzer-Moore knocked in 16. The Red Devils have a paint-reliant game, only making four threes on 22% from beyond the arc.

“We really focus on our help side defense and take pride in guarding people,” Bennett said. “We don’t get beat off the dribble too many times throughout the game. We really are able to use our size and athleticism to keep teams out of the paint, but when they do get into the paint it’s important we go straight up and not give teams the opportunity at the line.”

Despite not having a great showing from beyond the arc, the Red Devils were able to get to the line and convert at a high rate, shooting 19-22 in the sectional title game.

The Trojans have an ability to create offense through multiple players and don’t relying on a true number one option, with Ankney leading the team in scoring through the last two games, while Jackson led the team with 17 in the first round of the sectional.

Ankney believes that having five solid offensive players creates a team difficult to bring down. The Trojans have used their offensive firepower to beat teams in the second half, outscoring opponents 77-59 in the sectionals.

“It is important that we have five guys who can score because there’s a chance for anybody to step up and score. It is harder for other teams to shut us down offensively,” Ankney said. “We try to move the ball and when one of us has a good shot, we try and move the ball to where we get a great shot.”

Center Grove enters the regional on Saturday with the focus on Evansville Reitz, but they understand what is at stake.

“Winning regionals will be a very big accomplishment for me and this team, but we will not be satisfied,” Cerny said. “We have all worked extremely hard to get to this point. We want to finish the season off with a ring, and we believe we can do that.”