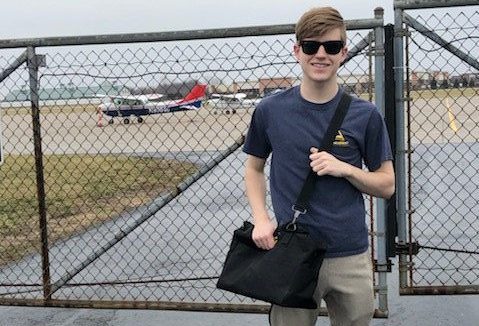 Senior Matthew Gregory stands next to one of his planes.

Senior takes up flight lessons to further his dream of piloting

Many high schoolers can say they have been on an airplane, but very few of them can say they have flown one. Senior Matthew Gregory, who grew up wanting to become a commercial pilot, can count himself among the few. Gregory said he is one step closer to achieving his childhood dream after recently taking up flight lessons.

“My favorite part about flying is getting to see the world from a whole new perspective,” Gregory said. “The views you get to experience from the nose of the plane are like nothing I have seen before.”

Gregory said he is one step closer to achieving his childhood dream after recently taking up flight lessons with Jeff Airlines. He goes on 2-3 flights per month with a pilot instructor and must complete 45-50 hours of flying time to eventually get his pilot’s license.

“It’s really intriguing to me to learn all about aviation and getting to be in control of a plane,” Gregory said. “I’ve always been interested in planes and for as long as I can remember I have always wanted to learn to fly one.”

Gregory said flying has made him more confident as he gains experience.

“[Flying] has taught me confidence for sure,” Gregory said. “When you are in complete control of the plane, you can’t make any mistakes because you are who’s in charge of making sure it travels from point A to point B.”

Even though Gregory devotes a lot of his time towards getting his pilot’s license, he only has about 10 flight lesson hours under his belt, so some aspects of piloting are still new to him.

“During one of my flight lessons, my instructor gave me full control of the plane during the landing,” Gregory said. “I honestly wasn’t ready for that. It was a super rough landing and I thought I was going to crash the plane.”

Despite early struggles, Gregory has not been deterred from his dream. He plans to continue his journey next year by studying Aviation at Purdue University.

“Purdue has a fantastic flight program and I have wanted to go there for my entire life. When I found out that I had gotten accepted I was so relieved,” Gregory said. “There is no other school that I would rather continue studying aviation at.”

For Gregory, there is more to flying a plane than just studying and learning all of the controls. It’s the thrilling feelings that he gets while he is in the air.

“I get a huge rush of adrenaline during take off and landing,” Gregory said. “My heart beats really fast when I first get going, but once I’m in the air, it feels freeing.”