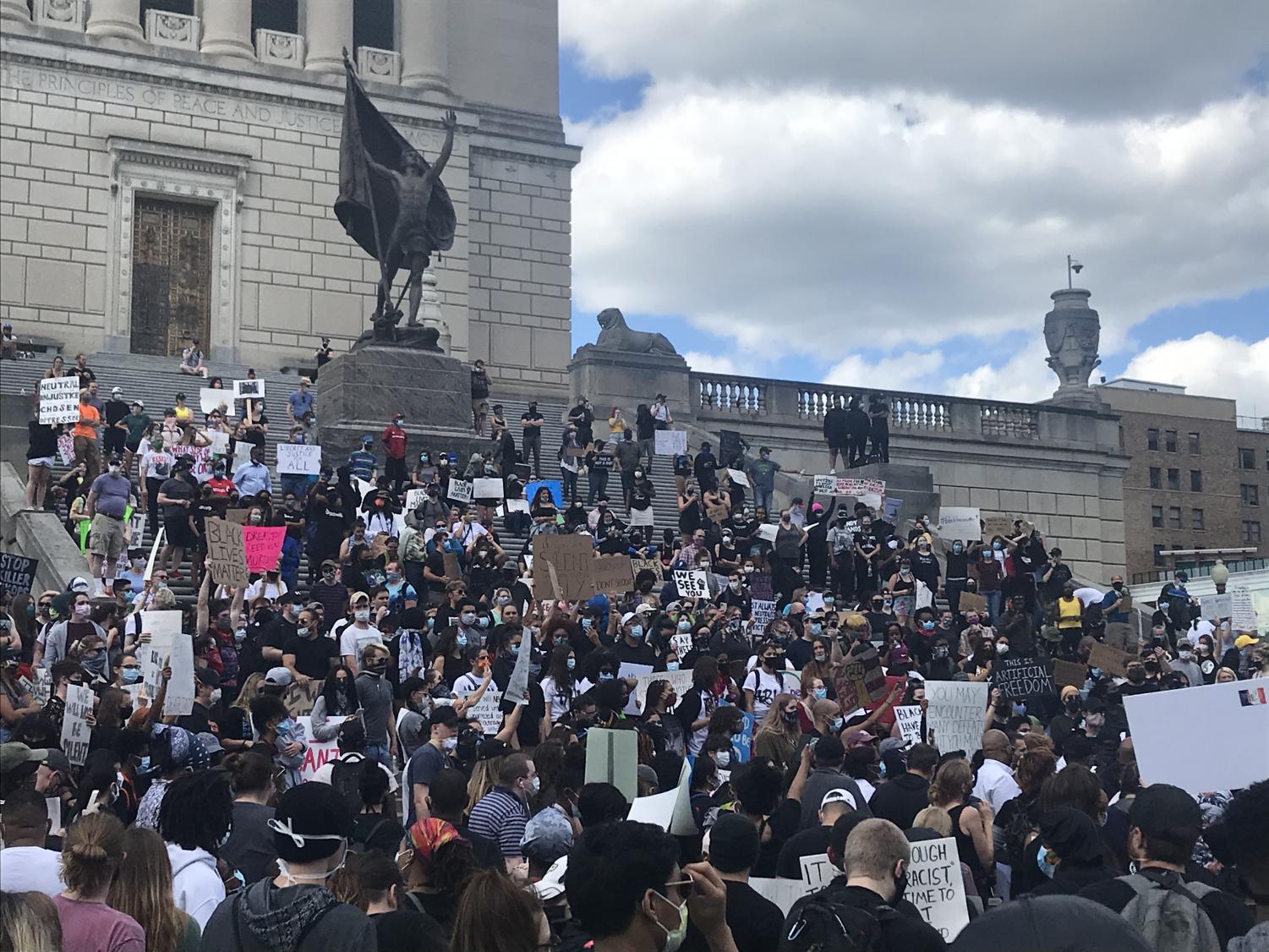 Protests occurred over the summer in support of the Black Lives Matter movement across the country.

Protests occurred over the summer in support of the Black Lives Matter movement across the country.

Africa is currently in a major state of emergency.

Over 6,000 miles away, a social revolution is rising in the diaspora of Nigeria, as citizens have taken to the streets to unite and call for the end of a police unit named the Special-Anti-Robbery Squad (SARS). On October 3, 2020, disturbing footage was released of officers dragging two men from a hotel parking lot, shooting one of them, and driving away without consequence. Mass protests erupted across major West African cities.

As a first-generation immigrant from Ghana, I find it alarming that my own community here at Center Grove seems oblivious to the numerous atrocities happening in my continent. Men, women and children are being teargassed, killed and left in the streets. The rubber bullets once used by the unit during peaceful protests have now been replaced by live ammunition. The Western world is seemingly watching in utter indifference as countries, such as Nigeria, severely suffer at the hands of their own government.

This faceless security force is known for perpetuating the extortion, harassment and killing of its citizens for decades, and it has faced little to no ramifications for their despicable actions. SARS, the very unit sworn to protect its citizens, has been terrorizing and oppressing its people. Sound familiar? Once again, Nigeria’s crisis unveils the reoccurring global issue of police brutality that is abusing every nation today.

After a significant accumulation of anger, sorrow and frustration evoked by the corrupt unit, Nigerians are protesting for immediate, whole legal reform to not only end SARS but to push for better jobs, schools, infrastructure and especially an end to the sick government’s tactics. Nigerian President Buhari, the man in control of the SARS unit, has repeatedly voiced his concerns for their dissolvement, which has been announced.

Don’t be fooled. This is not the first time SARS has been “dissolved.” Despite Buhari’s announcement that SARS is now disbanded and will be replaced by a group named SWAT, protesters continue to fear that SARS officers will easily integrate into the new unit without facing accountability.

I have continuously asked myself numerous questions: the world protested for the black American, victims who died at the hands of police brutality in the US. Now the same events are reoccurring ten-fold, yet where is the recognition, the protests and the genuine fight to continue advocating for black lives? Where are these calls for the same justice for the people in Nigeria? Was the social awakening from early May and late June just a trend? Black lives matter everywhere.

It is hopelessly evident to me that black West Africa is not a Western priority. As I continue to ask myself questions as to why the awareness of these issues seems belittled, I want to emphasize why it should be a priority, especially in this community.

Reminder: police brutality, injustice, crime, state sanction and violence are all issues our communities largely suffer from, especially people of color, marginalized communities and immigrant populations. Similar to Nigeria, our people continually suffer from exploitation and oppression, so why should we not advocate for the freedom of another nation suffering from the very same injustices?

“Every time a police officer harrasses, extorts, unlawfully detains, or shoots at a citizen without consequence, it further normalises police brutality, and makes it more likely to occur in the future.” ”

You do not need to belong to a specific nationality or race to advocate for the rights of human beings and combat against corruption in other nations. Not caring about these issues is just as bad as the people who are harming and extorting them. We are a nation that already has all the elements of power to end the corruption of leaders in Africa and promote social change for these countries, yet, many of us are blind and uninvested in the lives of nations that are seen as underdeveloped.

I want to emphasize the importance of being involved in issues. If you genuinely care about the wellbeing of others, you would be involved in the change for Africa, no matter how little you think your impact is.

I always see claims that this community is supposed to advocate for diversity, inclusion, and freedom, but I wonder if this is only limited to the borders of our district. We need to fight for the sake of the communities around us, not just our own city. Just as the world fought with us after victims like George Floyd or Breonna Taylor suffered at the hands of their own justice system, the world should fight for the very communities whose voices are unheard.

Take the initiative to seek awareness of these issues and understand the extent to which these marginalized communities are suffering. Make an effort to have conversations with people you know and reveal the importance of the issue to those around you.

Awareness is only a means to a solution. To uplift those less privileged and donate to national organizations online, most notably Femenist Coalition which is a group of Nigerian feminists who promote equality amongst Nigerian women. Additionally, charities such as the FlutterWave and Gatefield Impact are raising funds for crises in countries like Nigeria. Over $180,000 USD has been raised and distributed to provide food, medical, and legal aid to protestors. MentallyAware, a mental health organization accessible on Twitter, is accepting panic cards to help struggling protestors cope with the stress of the situation.

I cannot express enough that the signing of petitions and the encouragement for others to sign petitions, enables us to unite and work closer to worldwide reformation. I encourage you to use any platform you have to amplify these voices of marginalized communities. Reform is largely propelled through social media so it is incredibly important to use your voice.

My heart aches for Africa and the general lack of awareness and persistent media coverage of the continent’s major exploitation. I have hope for the future that these hardships will be conquered and endured, but your personal involvement is needed to take the next step.