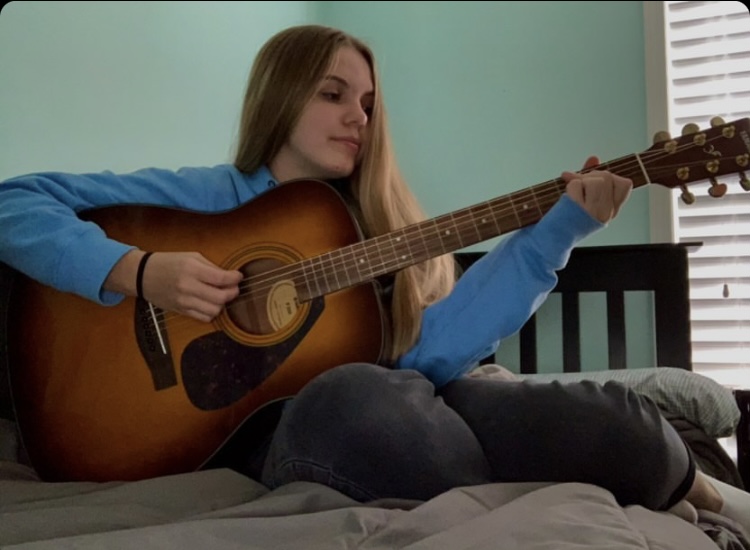 Sophomore Taylor McLaughlin strums her guitar as she writes song.

Sophomore Taylor McLaughlin strums her guitar as she writes song.

Sophomore channels her experiences into music, releasing her first song

As Taylor McLaughlin ‘23 held the phone in her hands, she smiled at the video playing on the iPhone screen. It was a video of her singing her own song creation, smiling proudly and singing loudly, at age two. It seemed as if nothing had changed; she was still the happy, loud, music-making, song-singing girl, thirteen years later.

Music has always played a prominent role in McLaughlin’s life. She has played several instruments: the ukulele, piano, viola and guitar. Additionally, she sang in both school choir and at her church. Now, Taylor has started to produce music, evident from her battered blue notebook, filled with furiously-scribbled lyrics and unfinished songs.

“I’ve always really appreciated songs with good lyrics, so, eventually, I was like ‘I can write something like that’ so I just started writing down the things I saw,” McLaughlin said. “My earliest songs were just silly observations really, and as I got to understand more and more, I started writing about deeper things.”

McLaughlin added that a few of her “deeper” songs were rooted from some of her not-so-fine moments from her life, times when she felt pained or sad. However, she notes that good comes out of it.

“I’ve definitely gone through a lot of weird, hard stuff. Every time I’m sad or exhausted, I’ll just pull out my phone or notebook and start writing. Being able to pour that out on something that I can physically have out on paper helps me get over things. I’ll know that I can let this go because I just sang a song about it. It’s very relaxing.”

Songwriting was McLaughlin’s passion and talent all in one. It initially started as a leisure activity that grew into her dominant interest. Songwriting consumed several hours of her week, totaling between 20 to 40 hours per month. The time used was never wasted. However, the time-consuming recording process, writer’s block and Mclaughlin’s other commitments complicated her ability to find time to complete her songs.

“Lyrics take me a couple hours and actually writing out the music takes 10 to 20. The recording process is always spread out because I have to do a lot of it with my dad’s recording equipment which is not always there for me to use, so it often happens in 30 minutes to one hour bursts,” Mclaughlin said. “My biggest struggle is finding the time to write and record because of my extracurriculars. I do show choir, theatre, church things and am a student.”

In all of her outside activities, she strives to improve herself, and her music and songwriting is no different.

“There are things I could be doing better. I still have doubts over my music skills. I’m not like the best singer in the world, and I know that. Nothing is ever going to be perfect in my standards, but it’s exciting to progress,” McLaughlin said.

Although she has questioned her abilities, it hasn’t hindered her music making and song production. She has written 12 to 15 completed songs, with her first released song “Better than Heartbreak” put out this summer.

From writing a song telling a friend that everything would be okay, to ranting about an ex-boyfriend, McLaughlin used her passion for songwriting as an outlet to allow herself to accurately express her emotions and to have her voice be heard.

“I feel like I’ve gotten more serious and more excited about showing the world what I like to write and perform.” McLaughlin said. “Music has just always come to me easier than other things. It’s my talent, what I’m good at and it’s just exciting and something that I’m passionate about.”

That passion has always been within McLaughlin and has been consistent from age two. As she set the phone down after watching her performance as a toddler, she smiled as she noted that even though she’d improved, she still considered herself the same silly, goofy girl at heart.