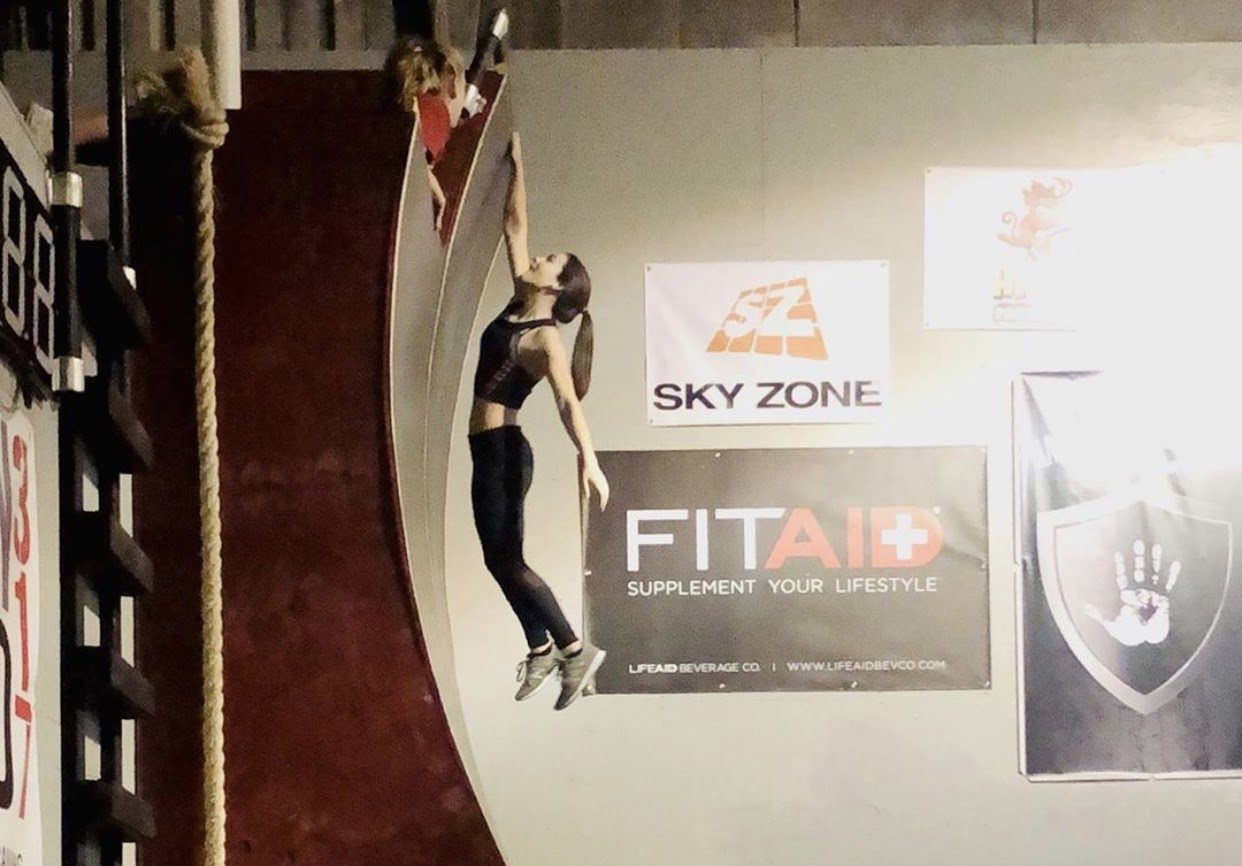 Wombles scales the warped wall, the final obstacle in the course.

Wombles scales the warped wall, the final obstacle in the course.

The lights dimmed, the crowd sat silently on the edge of their seats, and freshman Jessica Wombles stood alone on the course. The only thing that stood between Wombles and the final buzzer was a towering, monstrous warped wall. As she peered up at the wall from below, it looked as if it could swallow her whole at any moment. Wombles squinted her eyes, focused her mind and prepared to attack.

“I feel my heart pumping through my body, the adrenaline coursing through my veins to the point where I’m practically shaking. I take a few deep breaths while the room is quiet yet bursting with noise. All I have to do is run up that 14 feet wall and reach my victory. I force myself to focus, then take that running start leading up to my awaiting victory at the top,” Wombles said.

Wombles is a ninja warrior. She started training about a year and a half ago at a gym called “Train Yard 317.” She was inspired by the show “American Ninja Warrior” and decided that she was interested in learning how to defeat the obstacles and eventually try out for the show.

“I want to be on the show because I feel like it gives me a sense of accomplishment because I grew up watching it every day. I would come home from school just to see what happened in each course,” Wombles said.

With her goals in mind, Wombles has high ambitions for her training. Having qualified for finals in Las Vegas, Wombles needs to train as hard as she can.

“My main goal in ninja training is to push myself to the best I can be. I train as hard as I can every time I go to my ninja gym (3 days a week). The Las Vegas finals, which I qualified for, are coming up soon and I really want to get to the final stage,” Wombles said.

Wombles trains and competes on numerous different obstacles, all of which test endurance, strength and balance.

“My favorite obstacle is a trapeze catch,” Wombles said. “That’s when you swing on a trapeze bar really high and then let go and catch another trapeze bar. I love it so much because it gives me the feeling of flying. I love all the strength it takes to do ninja. There are a lot of obstacles that are very fun for me.”

Apart from the physical strength that Wombles needs to conquer the obstacles, ninja training also requires a great deal of mental strength.

“The most challenging part would have to be the mental part of it. Yes, ninja requires a lot of core and upper body strength and balance, but when you really think about it, winning can only happen if you’re in the right mindset. If you think you’re going to mess up on an obstacle, then you will. But you have to train your brain not to give up,” Wombles said.

Wombles explained that she used to suffer from mental blocks; however, she has learned to overcome them.

“I used to have mental blocks until during the course,” Wombles said. “One time I realized that I only had one minute left on the clock before my time ran out. I realized there wasn’t enough time for mental blocks so I jumped hoping I could catch the obstacle and I did.”

Even with the challenges that ninja presents, Wombles is able to balance her struggles in a healthy way. She even manages to have time for other activities. Wombles is also active in other sports, such as cheerleading; however, to Wombles, ninja stands out from all the rest.

“Ninja is an individual sport that is very intense. Don’t get me wrong, I love cheer. But ninja beats any sport. It requires focus, talent, and brute strength. I definitely love competition. The competition between courses and competitors really hypes me up,” Wombles said.

Despite the physical and mental obstacles that ninja creates, Wombles plans to continue training to be the best that she can possibly be. After all her training experience, Wombles has lots of advice to offer to other students.

“I never realized how far I could get with ninja and I never really believed that I could get to the Las Vegas World Finals. Everyone can do absolutely anything with the right mindset. I’m only 5’1 and can never reach any of the obstacles, but I learned to jump higher to reach or run faster up the wall to reach the top. If anyone tells you that you can’t do it, prove them wrong,” Wombles said.